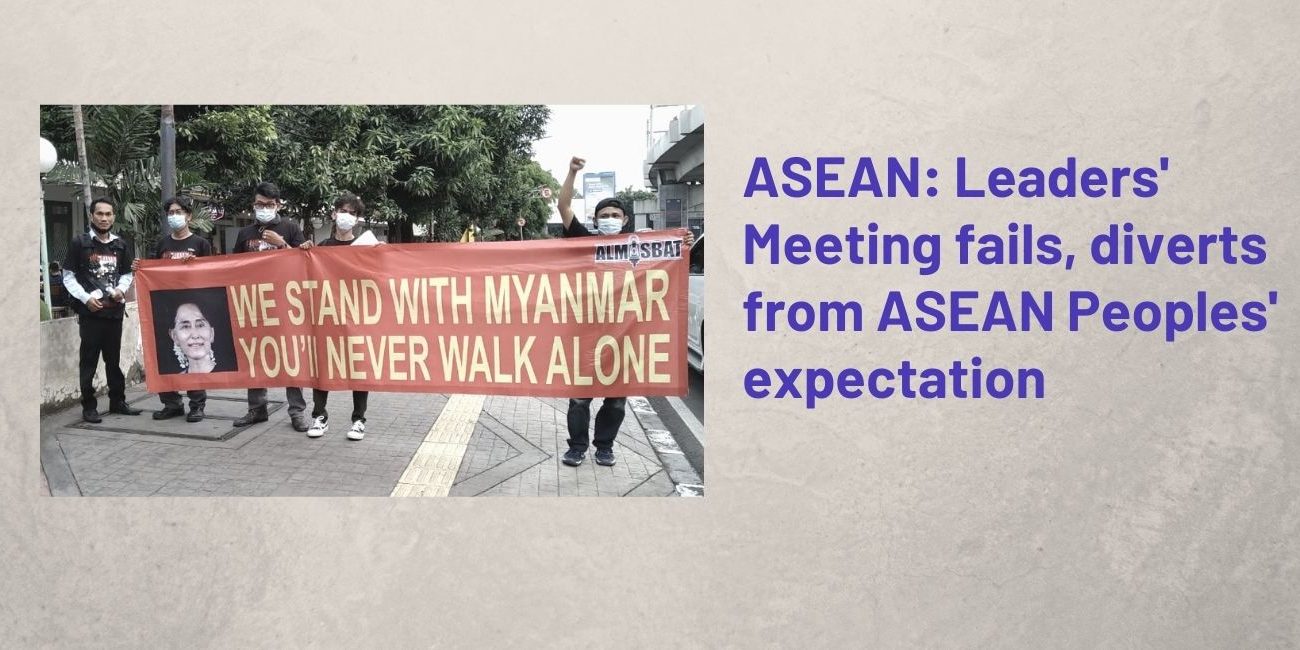 ‘ASEAN has failed to recognise the public desire for a meaningful political solution during its Leaders’ meeting,’ said the Asian Forum for Human Rights and Development and its member organisations in a statement today.

Two days before the meeting, around 827 individuals, 402 civil society organisations in Myanmar, and 468 in other Southeast Asia region and globally issued a joint open letter calling ASEAN leaders to reject the presence of the junta, invite the National Unity Government, to release political prisoners, and to coordinate with the United Nations. These crucial pleas were not brought up in the meeting.

However, the meeting was attended by the junta’s head Min Aung Hlaing as the sole representative from Myanmar. It generated five critical points for Myanmar to call on the immediate cessation of violence, constructive dialogue among all parties, appoint an ASEAN Special Envoy to facilitate the mediation process, provide humanitarian assistance, and deploy the ASEAN Special Envoy and delegation to visit Myanmar.

“’The fact that a state violence perpetrator like Min Aung Hlaing on behalf of the junta perpetrator was allowed to negotiate and agree on the consensus, together with other ASEAN Member States’ Leaders, leads to a weak resolution from ASEAN,”’ said Shamini Darshni Kaliemuthu, Executive Director of FORUM-ASIA XX. “’By doing so, ASEAN also lends legitimation to the military junta and risk elevating his position as state leader. ASEAN has failed to recognise the public’s desire for a meaningful political solution during its Leaders’ Meeting,”’.

“If ASEAN would envision a Myanmar-led process, it should make a deal with the democratic government who represent the voice of the people, not with the military,”’  said Khin Ohmar, the founder of Progressive Voice . “’By not coming into a unity to call for the release of all political prisoners as the output of the meeting, among other issues, ASEAN Leaders’ Meeting has succumbed to the junta’s presence.”

The right groups condemn the reprisals against the NUG by the military, which coincided with the ASEAN Leaders’ Meeting. A day before the Leaders’ Meeting, the military junta issued arrest warrants for Myanmar’s NUG ministers, which shows the military’s commitment to repressing and stifling the voices of Myanmar people.

Further, the right groups also alarmed by the oppression against peaceful protesters in front of the ASEAN Secretariat to oppose the presence of  Min Aung Hlaing in the Leaders meeting. At least five paralegals and assistant lawyers from the Indonesia Legal Aid Foundation (YLBHI) and the Indonesia Legal Aid and Human Rights Association (PBHI) along with six protesters from the youth and labour movement were detained at the South Jakarta Police Station.

“'[The arrest] showcases a continuous repression from the Indonesian government to the freedom of peaceful assembly and association,” said Asfinawati, Chairperson of YLBHI. “’It also implies that Indonesia, as the biggest democratic nation in ASEAN, does not want to criticise and would like to maintain its relationship with the junta.”’

With the five key points that failed to meet the people’s demand and the repression against protesters in Indonesia, and the arrest warrants for the NUG ministers by the junta, ASEAN intervention has again diverted from the people’s desire for a conflict-free and peaceful Myanmar to another “futile reunion” between leaders.

‘Only by having meaningful dialogue with the people of Myanmar and incorporate their voices in its intervention ASEAN can be a meaningful and relevant mechanism,’ said Shamini Darshni Kaliemuthu, Executive Director of FORUM-ASIA.