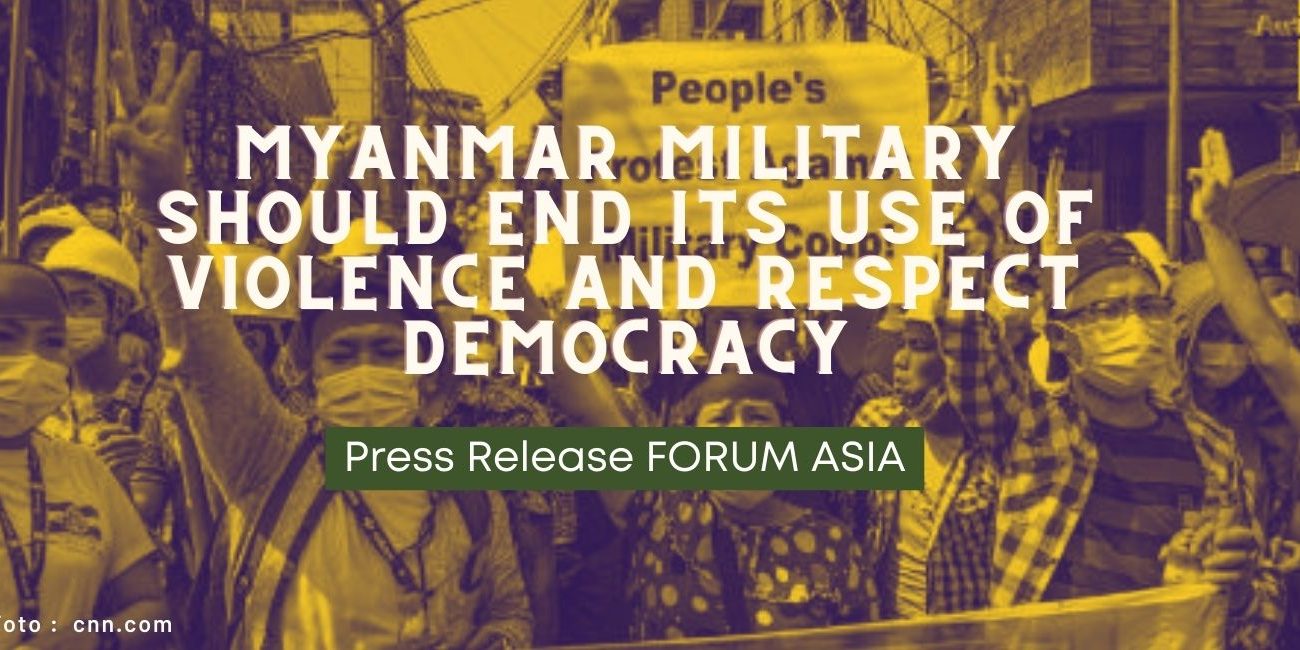 The undersigned groups today denounced an apparent coup in Myanmar, and associated violence, which has suspended civilian government and effectively returned full power to the military.

On 1 February, the military arbitrarily detained State Counsellor Aung San Suu Kyi and other leaders of the National League for Democracy. A year-long state of emergency was declared, installing Vice-President and former lieutenant-general Myint Swe as the acting President. Myint Swe immediately handed over power to commander-in-chief Senior General Min Aung Hlaing (Section 418 of Myanmar’s 2008 Constitution enables transfer of legislative, executive, and judicial powers to the Commander in Chief). Internet connections and phone lines throughout the country were disrupted, pro-democracy activists have been arbitrarily arrested, with incoming reports of increased detentions. Soldiers in armoured cars have been visibly roaming Naypyitaw and Yangon, raising fears of lethal violence.

“The military should immediately and unconditionally release all detained and return to Parliament to reach a peaceful resolution with all relevant parties,” said the groups.

The military and its aligned Union Solidarity and Development Party (USDP) had disputed the results of the November elections, which saw the majority of the seats won by the NLD. The arrests of the leaders came just before the Parliament was due to convene for the first time in order to pick the President and Vice-Presidents.

The man now in charge of the country, Senior General Min Aung Hlaing, stands accused of committing the crime of genocide, crimes against humanity and war crimes, raising alarms for the human rights situation, in particular for ethnic minority and Rohingya communities. Military rule also reverses the emerging political openness that occurred in recent years.

The military has remained an influential force in the government, despite changes in the previous decade. “How the military has acted has proven it has never been committed to any democratic change. It has always been interested in preserving power,” said the groups.

The organisations, comprising diverse CSOs and NGOs, call on the Myanmar military to:

The groups also made the following demands to:

The Asian Forum for Human Rights and Development (FORUM-ASIA) is a Bangkok-based regional network of 81 member organisations across 21 Asian countries, with consultative status with the United Nations Economic and Social Council, and consultative relationship with the ASEAN Intergovernmental Commission on Human Rights. Founded in 1991, FORUM-ASIA works to strengthen movements for human rights and sustainable development through research, advocacy, capacity-development and solidarity actions in Asia and beyond. It has sub-regional offices in Geneva, Jakarta, and Kathmandu. www.forum-asia.org

For further information related to this joint statement, please contact: